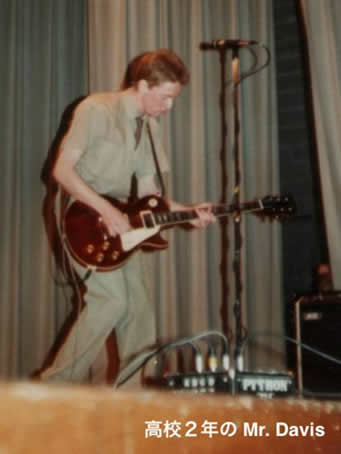 When I think of my own high school days more than anything I think of music. When I was 15 I got my first part time summer job at Mac's Milk, a local, early version of a convenience store. That summer I worked seven days a week for the amazing rate of $2.50 an hour (roughly 230 yen). The pay per hour wasn't much but by the end of the summer I was able to buy a guitar amp and soon I was in a band called The Vogues. Life was good. 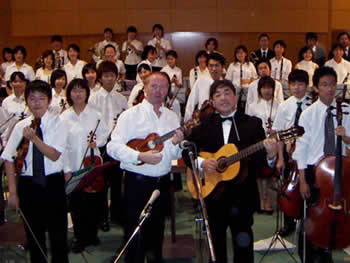 Fast forward to 2004. In my first year of teaching at ICUHS, I co-moderated the orchestra. I was so inspired by the energy of the students that one day I suggested to the orchestra members and to the conductor, Mr. Matsumoto. "Hey for the encore at the school festival, why don't I play the ukulele and sing with the orchestra?"

Ukulele? Sing? With the orchestra? I'm sure the idea sounded strange but fortunately the orchestra members were too nice to say no.

Then one night during the summer gasshuku, it was finally time to give the song a try.
Taking my position in front of the orchestra, I strummed the ukulele and began to sing the first verse of the Beatles' song "Something". As I began the second verse,
the violins began to gently pour in and soon the entire orchestra was with me. I kept singing but inside I was thinking "Oh - my - gosh. This sounds sooooo amazing!"

One month later, when we performed at the school festival, the encore song went pretty well. I don't know how many people ever get the opportunity to sing with a real orchestra but I highly recommend it. It feels great!

And by singing with the orchestra I could feel that despite the many miles and years
between my own high school days and ICUHS, there was a continuity between the things that I loved as a high school student in Toronto and the things I love today as a teacher at ICUHS.

whether it's dance, sports or music hold on to

the things you love today