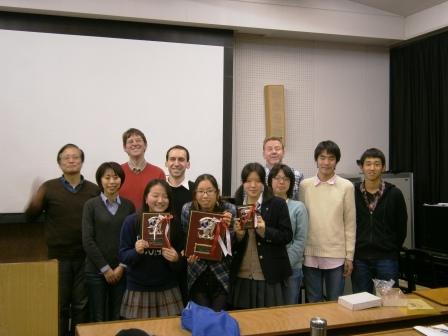 2012/02/16. About 40 students and teachers gathered in the Lecture Room to watch six students compete in the annual 2nd Year Level 4 English Speech Contest. The topic of the speeches was "What is the true meaning of 'internationalization'?" Everybody agreed that the standard of the speeches was very high.

The winning speaker was Eri, with second and third prizes going to Miwa and Nana respectively. They were each awarded a specially engraved plaque. The three other participants were Yoshifumi, Yoshito and Sakura. All six students received an ICUHS clear file and rotating pencil as participation prizes and will receive an official Speech Contest certificate later in the term.